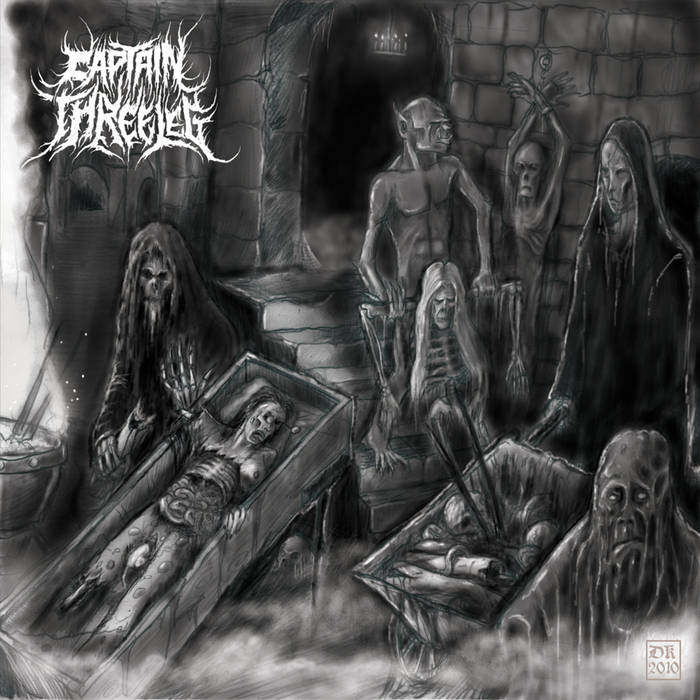 Tracks #25-49 recorded September 5, 2009 using a Fostex XR-7 Multitracker with vocal overdubs done August through November of 2010 using Reaper v3.11. These songs were recorded during the same session as “A Few Lixxx” album.

“Nightly Desecrations” is a collection of previously unreleased recording sessions. All songs written and performed by Captain Three Leg with the exception of the following: #44 Dropdead, #45 Infest, #48 Unisex. Mastered using SoundForge v4.5.

Cover art and logo by Daryl Kahan, Inside art by Tom Kemp, logo by Blakk / Angelkill, digital booklet by J. Randall. Thanks to Clint for releasing this, to Randall for hosting in on “Grindcore Karaoke”, to everyone who contributed artwork for this release and for Chris and Jake for always finding time to record with us on your visits home.

“Nightly Desecrations” was released in a limited edition of 100 pro-CDR’s by D/A/S Cassettes and Vinyl. Physical copies can be obtained by writing Clint at: dxaxsxgrindcore@gmail.com or by visiting his blog-site at: dxaxsxgrindcore-gcxgs.blogspot.com

A note about our lyrics and the lyric writing process: This is the first time any of our lyrics have been made available. In the earliest days we didn’t even bother writing lyrics and just faked them, but over time we started writing stuff down so it didn’t sound like we were just going “rrrrrr, grrrrrr, grrrr!” over our music. We’ve never been an issue oriented band; these lyrics really do exist only to fill up space and nothing more. Grindcore in itself is pretty silly. Playing music as fast as possible, pretending to be angry about something, screaming at the top of your lungs is all pretty silly, especially when done by a bunch of people in their mid-30’s or older. At this age, unless we’re singing about how we don’t have any money leftover after paying our mortgage, we’re struggling to find things to write about. We always write our music first, and then lyrics a great deal of time later. We wrote about the most ridiculous and extreme scenarios imaginable knowing nobody would be reading our lyrics. A lot of our song ideas come from real-life news stories exaggerated to make for a better story. Just as often, a 3 to 5 second sample from a movie will dictate what the song will be written about and leave us scratching our heads trying to come up with lyrics to match. As a result, most of our lyrics are quite dumb, especially so considering we didn’t think anyone would ever see them or be able to make them out. These lyrics were never meant to be taken seriously; they’re offensive for the sake of being offensive, stupid for the sake of being stupid. Even with this disclaimer, I’ve chosen to withhold some of the lyrics from being printed as some were just too stupid/offensive. Through years of listening to this sort of nonsense, you might be able to make some/all of them out, but the cloud of doubt comforts me somewhat and I hope we’ve done a good enough job of making them indiscernible to the listener. They aren’t important anyway. They’re only words and exist as a place holder for growling and gurgle noises.