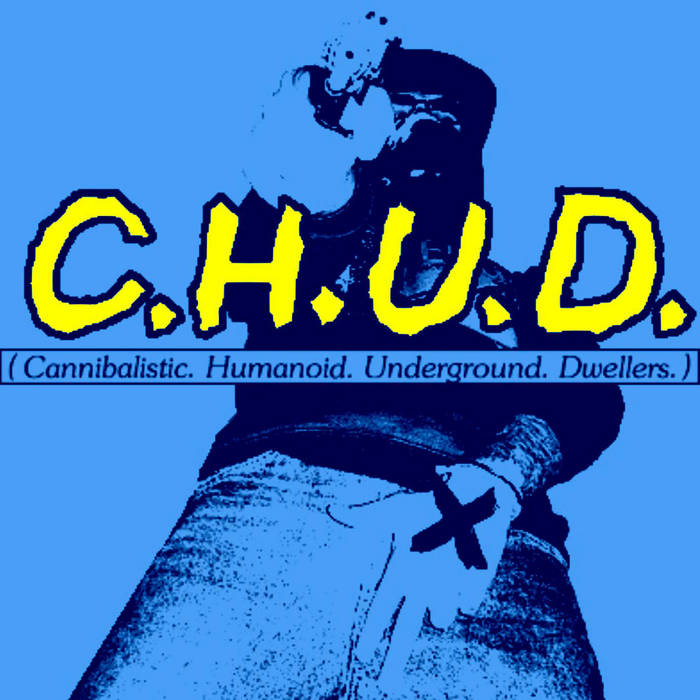 C.H.U.D. started out as a bunch of 14 year old losers from the Iowa suburbs playing Misfits and Dead Kennedys covers in a basement. The original songs were a mix of teenage punk angst and mimicking our influences.  We wrote songs about isolation, paranoia and anger, but we also wrote about horror movies like the Misfits, recently murdered musicians like the Meatmen, and unity, like every punk band ever.  It was a pretty standard arrangement, but it stood out at the time because we were the youngest band doing anything like this around there and as a result we were the first exposure a lot of kids there ever had to a punk band. Part of that was fueled by a ridiculous “public interest” piece written about us in the local paper.  The headline proclaimed: “It’s Angry, Loud, and Theirs: C.H.U.D., a punk band, unites self-confessed misfits”.  Only in fucking Iowa is this news. Despite the glowing press, the original iteration of C.H.U.D. flamed out after about a year shortly after the other guys kicked me out because I couldn’t sing.  Eventually, all of the members except myself re-connected in a grind/crust band called Black Market Fetus.

About two years after C.H.U.D. had ceased to exist. Someone came up with the idea to do a mock reunion show, the joke being that we were some huge band coming out of retirement to meet the non-existent demand of our non-existent fans.  Since everyone else was already playing in Black Market Fetus, all we had to do was pass the mic between singers at one of their shows and bam, C.H.U.D. had a reunion.  We all had fun, so we just let it roll and started piggybacking onto other Fetus gigs.  None of us had intentions of doing anything meaningful, it was just an excuse to goof off and to get to play around with songs that didn’t fit in with everyone’s other bands.  For me, it was my chance to live my dream of being a bad guy wrestler and to poke fun at how seriously the bands and kids in the scene took themselves.  Riffing on the Victory Records and New York Hardcore crowd, I convinced the other guys that we should pretend to be militant straight edge gangstas, and to start a feud with Black Market Fetus.  Because we almost never practiced or wrote new songs and played to the same crowds all the time, things kept getting sillier in an effort to keep it fun and fresh.  We started with dorky costumes, staged fights, and, my personal favorite, building a robot costume out of cardboard and HVAC components and convincing friends to wear it and be our mascot. We called it CHUDBOT and it was later immortalized in a tribute song by Bodies Lay Broken. Of course, anyone dumb enough to put on a bulky robot costume that you could barely see out of at a hardcore show inevitably got the shit knocked out of them by the audience.

Though we rarely wrote songs, when we did they were every bit as intentionally dumb as the shows we put on.  The effect was amplified because we played these intentionally stupid songs back to back with the songs we wrote when we were 15, which were unintentionally stupid in their sincerity. Of the 13 songs we could consistently remember, all of which are included here, 5 of them were holdovers from our first run, although one of them we had completely forgotten the words to.  Wrestle Metal was originally Untitled on our demo, and I would make up the lyrics on the spot every time we played it.  When it came time to record for the 7” I knew I couldn’t get by with slurring non-words like I did live, so I wrote some stupid ode to 80’s wrestling.

We stuck around in spite of a complete lack of either a desire on our part to “do something” or interest in the local scene to see or hear us.  We played together for roughly six years, and for the first five there were maybe two people who were into it. One of those people was Nate Fetus, and since he was one of the main bookers in the area back then we kept getting on shows and playing to these confused, uninterested punkers who took themselves way too seriously.  Thanks to being shoehorned onto bills with good bands, we met our other early fan, Cap’n Andy. Andy offered to record us for free, which led to two sessions for a demo and proposed 7”, but by the time we got our shit together to release it we had all drifted away and eventually it just ended by default.  10 years later, when Andy asked me about releasing this online I was glad that it might actually get heard.   Playing in C.H.U.D. was some of the most fun I’ve ever had, and even though it was ridiculously stupid, I’m proud of it. The antics that made the shows fun didn’t translate in a studio, and I wasn’t able to hide my shitty vocals in the studio like I could in the chaos of a show, but even before we became a complete parody Andy and Nate saw something, so maybe somebody else out there will too.


Tracks 1-13 were recorded March 28, 2002 for a 7" that was never released. Tracks 14-20 were recorded during the winter of 2000 and were released as xCHUDx "The Motherfucking Demo". All songs recorded on a Fostex XR-7 Multitracker by Andy Koettel.